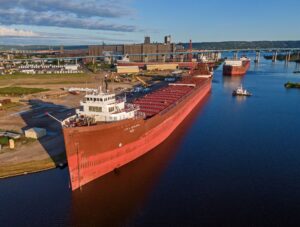 M/Vs Lee A. Tregurtha and Stewart J. Cort coming into Fraser Shipyards in Howards Bay, a hub for maritime commerce, historical sawmill and grain industries for more than a century. The only U.S. shipyard above the Soo Locks and largest grain elevator in the Duluth-Superior Harbor are located here. Photo Credit: David Schauer

The Great Lakes Legacy Act dredging project in Howards Bay is complete, marking a key milestone in pollution cleanup in the St. Louis River Area of Concern (AOC). Howards Bay is an industrial bay in the City of Superior, Wisconsin that’s important for Great Lakes commerce.

The project was performed in partnership with the Wisconsin Department of Natural Resources, Fraser Shipyards Inc., the City of Superior, and U.S. Environmental Protection Agency in coordination with U.S. Army Corps of Engineers. The $21.5 million project in the St. Louis River AOC was funded through the Great Lakes Restoration Initiative with in-kind and cash contributions from the non-federal partners.

The completed project provides a healthier aquatic habitat that will improve the overall health of the St. Louis River. It also clears the way for future maintenance dredging to accommodate large vessels entering the shipyard, which had previously been restricted due to contamination in Howards Bay.

Dredged materials that met strict environmental safety criteria were placed on the closed Wisconsin Point Landfill to improve the function and slope of the landfill cap. The dredged materials are covered with six inches of clean material from the U.S. Army Corps of Engineers’ Erie Pier facility and then topped with six additional inches of topsoil to help establish native vegetation.

The landfill is being stabilized with hydro-mulch to protect the surrounding environment until permanent vegetation is established in the spring. As part of the project, the City of Superior plans to open the former landfill to the public as a natural area complete with gravel trails, benches and a pavilion.