END_OF_DOCUMENT_TOKEN_TO_BE_REPLACED

The cleanup and redevelopment of contaminated properties has become a critical land use issue for public and private entities across the country. These brownfields – abandoned or underused properties where redevelopment is hindered by real or perceived contamination – are often the key to a successful community redevelopment project.

Many developers, lenders and prospective purchasers of brownfields choose to enroll in the Voluntary Party Liability Exemption (VPLE) program versus a traditional cleanup path, since the VPLE provides certain liability assurances helpful to investors as well as future property owners.

END_OF_DOCUMENT_TOKEN_TO_BE_REPLACED

The VPLE program allows a party to conduct an assessment and remedial action of an entire property with DNR oversight to obtain a liability exemption. Insurance is required for VPLE sites where groundwater contamination levels are above enforcement standards and the DNR determines that natural attenuation will restore groundwater quality.

END_OF_DOCUMENT_TOKEN_TO_BE_REPLACED

The Remediation and Redevelopment Program has calculated the hourly review fee for sites in the Voluntary Party Liability Exemption (VPLE) program.

END_OF_DOCUMENT_TOKEN_TO_BE_REPLACED

This week the DNR worked with Department of Health Services (DHS) to ask the health agency to review 40 contaminants for possible groundwater quality standards. This work comes on the heels of the department asking DHS last spring to review an initial 27 contaminants, including two per- and polyfluoroalkyl substances (PFAS). PFAS are a group of human-made chemicals that have been used for decades in numerous products, such as non-stick cookware, fast food wrappers, stain resistant sprays and firefighting foam.

END_OF_DOCUMENT_TOKEN_TO_BE_REPLACED

The document can be reviewed at http://dnr.wi.gov/news/input/guidance.html and comments can be submitted through May 1, 2019 to the Fiscal and Information Technology Section Chief, Jenna Soyer, at Jenna.Soyer@wisconsin.gov.

This meeting is part of a series of rule development meetings that the RR program will host as it develops proposed rule revisions. The March 5, 2019, meeting will include:

END_OF_DOCUMENT_TOKEN_TO_BE_REPLACED

Wisconsin’s Voluntary Party Liability Exemption (VPLE) program allows a person to clean up a property and receive an exemption from future liability for historic contamination. Once cleanup is complete, the VPLE Certificate of Completion (COC) provides liability protection for the owner of the property. It is also transferrable to future owners. Since 1995, the DNR has issued 186 COCs. Eighty-three voluntary parties are currently pursuing a VPLE COC.

Recent concerns over emerging contaminants, particularly per- and polyfluoroalkyl substances (“PFAS”) chemicals in Wisconsin and nationally have prompted the DNR to evaluate the potential for historical discharges of PFAS and other emerging contaminants at properties enrolled in the VPLE program that are pursuing a COC.

END_OF_DOCUMENT_TOKEN_TO_BE_REPLACED 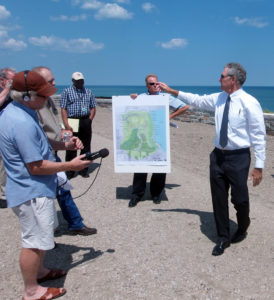 Oak Creek City Attorney Larry Haskin addresses the media and members of the Natural Resources Board during an August 2017 tour of Lake Vista Park in Oak Creek.

The city of Oak Creek plans to officially unveil its newest park this summer. It’s a prime location of nearly 100-acres that overlooks Lake Michigan and is the former site of a chemical plant that left a history of contamination when it closed.

The decades-long environmental cleanup was completed in 2014 using the DNR’s Voluntary Party Liability Exemption (VPLE) program. The VPLE program provided an incentive for the industrial owner to complete a cleanup that allowed the city to transform this former lakefront industrial site into a stunning new park with majestic views of the nearby lake.

You can listen to the story by Milwaukee Public Radio. 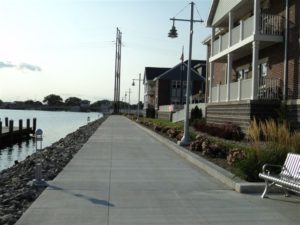