Created in the state budget as a one-year project to help the governor, legislators and state agencies further understand the unique challenges of taking on the cleanup and redevelopment of contaminated properties, the Wisconsin Brownfields Study Group now celebrates 20 years as a state and national model for stakeholder involvement.

The group is comprised of local government officials, academia and representatives from the private sector, and is facilitated by Department of Natural Resources staff.

“We appreciate the extraordinary effort this group has made to ensure Wisconsin’s brownfields program is effective,” said Christine Haag, DNR Brownfields Section chief. “If you’ve seen an old industrial property in your community transform into a new use, chances are this group had something to do with creating the mechanisms that helped make that happen.”

Brownfields are abandoned or underused properties with real or perceived contamination. Estimates from the U.S. EPA have put the number of brownfields nationwide at more than 400,000, with Wisconsin home to more than 5,000 brownfield sites. 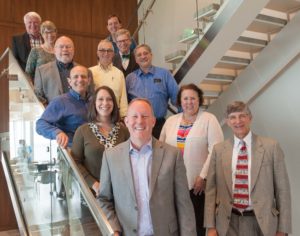 With an eye toward cleaning up those properties and returning them to productive use, the State Legislature and Gov. Tommy Thompson created the Brownfields Study Group in 1998. The task force was charged with evaluating Wisconsin’s brownfield programs and recommending changes, as well as proposing new financial, policy and liability incentives.

Thirty of the Study Group’s initial recommendations were adopted, and based on that initial success the Study Group continued to meet and provide input on brownfield issues.

Since then, the Study Group has provided additional legislative recommendations and rules changes, and today continues to drive important brownfields policy changes in Wisconsin. Successes include:

Since the passage of Wisconsin’s Land Recycling Act in 1994, more than 18,700 acres of rural and urban land has been cleaned up. The Study Group has not only received national attention as a stakeholder model but has spurred the formation of similar DNR groups for work on air, waste and petroleum issues.

The Study Group meets three or four times each year; the next meeting will occur in the early fall of 2018. Meetings are open to the public. If you’d like to be notified of future meetings, please send an email to Michael.Skwarok@wisconsin.gov to be added to a Study Group-specific email list.