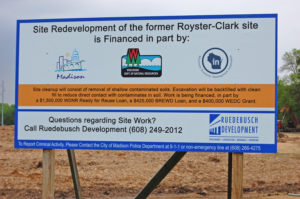 The Royster Clark project benefited from several financial incentives including the DNR’s Ready for Reuse program.

After more than 200 environmental reports and approvals over the course of ten years, the Wisconsin DNR issued a final Certificate of Completion for the former Royster-Clark facility in Madison. The Certificate of Completion was issued in March 2017 when the Wisconsin DNR approved the final investigation and remedial action and provided a liability exemption through the Voluntary Party Liability Exemption (VPLE) program.

The 27 acre Royster-Clark facility was once a fertilizer factory operating from 1952 until it closed in 2006. In 2011, Ruedebusch Development and Construction (RDC), a Madison-based real estate developer, purchased the property and took on the task of cleanup and redevelopment of the unique project.

The cleanup included contamination from leaking underground storage tanks and the excavation of more than 50,000 tons of nitrogen-contaminated soil removed from the site. The property went through extensive meetings, planning and approvals from the neighborhood association and the city of Madison. The redevelopment, some of which is already complete, includes affordable housing, market rate apartments, and commercial development, including a new public library branch and potential grocery store. The project also includes 50+ lots ready for single family homes.

The cleanup project benefited from several financial incentives including the Wisconsin DNR’s Ready for Reuse program, which is funded through a RLF brownfields grant from the EPA, Wisconsin Economic Development Corporation grants, and funding from the city of Madison.