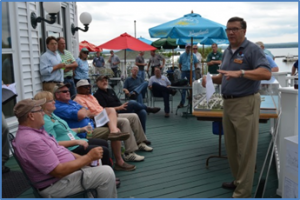 Northern Region RR Program Team Supervisor John Robinson provides members of the Natural Resources Board with an update on the cleanup work at the Ashland/NSP Superfund site during the Board’s August 2-3, 2016 tour and meeting in northern Wisconsin.

Natural Resources Board members got an up close look at the Northern States Power (NSP) Superfund site during the Board’s August meeting and tour in Ashland. DNR and the US EPA have been managing work on this lakefront site since contamination was discovered in the late 1980s. Phase I of the cleanup was completed in 2014, with groundwater monitoring continuing for several years. Phase II includes cleaning up impacted sediment from near the shoreline, with a “wet dredge” pilot project underway and scheduled to be completed later this year.

During the Board’s formal meeting on the second day of its visit, DNR Sec. Cathy Stepp announced that the City of Ashland had officially received a mix of brownfields redevelopment awards totaling nearly $450,000. The awards, from DNR’s Ready for Reuse and Wisconsin Assessment Monies programs were provided to help the community assess and clean up several properties and get them ready for redevelopment. Read the full press release.